Skip to content
jylbear Uncategorized May 6, 2010 3 Minutes
I’ve been slacking a bit in the blog world. I think when I started this project, I was planning on three times per week;  that quickly changed to twice per week…and now I’m aiming for Wednesdays-ish.  Turns out I had a lot of stories in my head – and once I got them out, the writing slowed for a bit.

Anyhoo – this week, I actually have been busy as the designated Renegade Leader on my street.

For some background – I live in a development that includes both townhomes and single family homes.  Those of us in the townhomes pay an HOA premium to have our yards landscaped (mowed, edged, seeded…just looking spiffy).

You can just imagine our surprise a few weeks ago when our whole street got letters indicating that we needed to repair the large bare spots in our grass as we were in violation of the covenants.  And, the letter, continued – ‘this most likely happened because you are driving on your grass’. 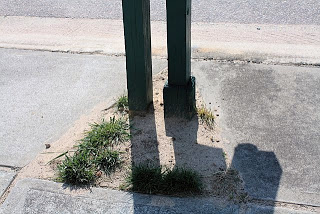 Well, obviously we are driving on our grass…in such an intricate way that we are not taking out the mailboxes on our way through.
Or the electric, phone and cable boxes. And, in some cases – at a 45 degree angle. 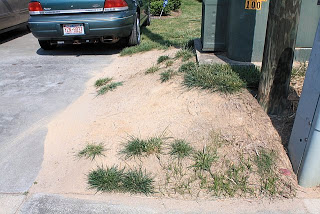 Our Violations Committee has lost its mind.

So, I’ve spent the last two weeks out riling up the neighborhood.  I’ve also taken a ton of pictures of the bare spots.  And using my CSI/NCIS/SVU training, I was able to find the common denominator on the bare spots…and it wasn’t that they were all part of a racetrack! 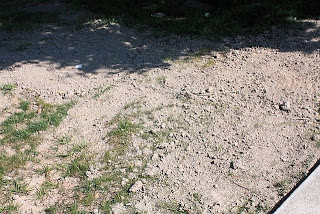 Hello Clay.  Filled with Rocks.  You are not helping.

Many of my neighbors have lived here since the building of this development – and…shocking!, there has never been grass on most of these bare spots.

Evidently, the HOA just figured that out (twelve years later) and have got themselves in a bind over the cost of sodding the entire development.  Doh!
Have you ever tried to fight an HOA?  Next time I’ll be taking a pin with me…because I’m pretty sure I’d rather poke a pin directly into my eye than go through this again.
I’ll give you just one – my favorite – example of our meeting last night.  We’ve been asked to sod all bare spots (which means tearing out the clay, tilling, resoiling) – so we’ll also have to adhere to a pretty tight watering schedule for the first month.
Several on our street do not have spickets at the front of their homes – only in the back.  When one of those residents asked how she was supposed to water with no spicket, she was told to ‘buy a watering can.’  Really??
Never mind that they want this all done now.  For those of you who haven’t heard of North Carolina (and I’m assuming at least half of the Violations Committee hasn’t) – despite that fact that it starts with the word “North…” it’s actually in the south.  You cannot plant grass seed or sod at this time of year.  We’ve already started our 90+ degree days…it will die.
Now, I have no doubt at all that we are going to lose this battle.  Our only goal, really, was for the HOA to plant the sod and then we’d promise to take care of it.  But it was was of those meeting where you knew you were beat before you even got to utter one word.
I guess there are positives.
I’ve gotten to know a lot of my neighbors.
And, in lieu of grass we can alter our landscape with mulch, stone or plant other things as long as we maintain it.  Do they sell Poison Ivy at the nursery?