Skip to content
jylbear Uncategorized May 12, 2010 3 Minutes
We’ve had a really strange Spring so far here in North Cackalacky.  It’s been up in the 90’s…it’s been near freezing (well, in the 50’s – which prompted me to go to work in full winter attire).
Last Sunday called for Sunny and 70’s.  I’m not sure what happened, but I woke up and decided to head to Home Depot to scrounge up some outdoor work – figuring it would be cool enough not to sweat.  As luck would have it, I arrived to find Landscaping Timbers on sale.  Perfect!
I’ve been wanting to spruce up my front walk for a while – and with a sale…well, heck, why not just do the front AND side yard.  As previously mentioned, grass does not grow well in my neighborhood, so anything I can do for my own curb appeal…that’s affordable…is a bonus.
I went through ten eight-foot timbers on Sunday…a whole bunch of nails (to stake them)…several rounds with my circular saw (who needs a husband, really?) and when I finally called ‘Uncle’ had a much improved sidescape.
Looking out the front porch:

And looking back down the side of the house:

Now, before I go on – a reminder that men are stupid.  I came to work Monday super proud – showing off little pictures.  And what do I get from one of the dudes here?  “Why’d you do it like that??  Why didn’t you stack the timbers to make big flower beds??”  I tried to explain that a) the ground SUCKS, so it is easier to pot plant and b) I live in a development with rules and c) I’m lazy….but he just kept going on and on.
Newsflash!  When a gal shows you something she’s really proud of, your only response should be, “Wow, that’s great!”
Back to me.  So I go to bed Sunday night jazzed up, though a bit exhausted from the project.  I still had to finish off the ‘beyond the AC Unit part’ – just another 14 feet, so planned on that for Monday night.
And then it happened.  I woke up Monday morning and quickly became aware of exactly how many times I’d squatted down on Sunday.  I immediately calculated how many times I went from a squat to a stand.  Then did some more math on times I’d bent over and carried eight foot timber around and nailed stuff.
Holy God.  I was quite sure a quick look in the mirror at anything between by heels and upper back would appear an escape hatch from which all my muscles were jumping – on their way to find a host that would be less abusive and unkind.
Sitting physically hurt my legs.  Standing required a deep intake of breath.  And walking….became a planned event as I had to allocate an extra five minutes to get anywhere for ‘warm-up’ time.
I started popping drugs like I owned stock in the company.

I pulled out the old heating pad and made a vain attempt to actually crawl inside of it. 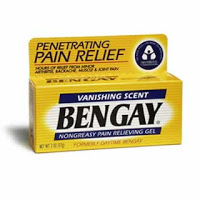 And, oooooh, Ben Gay….my friend…my confident…the keeper of all my secrets….we have spent a LOT of time together as of late.
There is no such thing as unscented BenGay.  Honestly, the smell doesn’t bother me at all.  I want to know something is working it’s way through the shards of glass that have replaced my muscle tissue in an effort to ease the pain.
I want people around me to smell it and think, “Wow, someone’s going through a battle right now.”  Hell, I’d even go out in public on purpose just so people could smell me….but the effort, oh the effort.
Referring back to my athletic days – I knew that Monday wasn’t going to be the worst of it…this was a going to be a multi-day issue.  And I was right Tuesday – just as bad.  Hello Ben, come on in….
And then today, like the sun bursting through the clouds after a week long rain (okay, a two day rain)…I was able to get out of bed with nary a grimace.  Thank you Ben!!
My only issue now is fate…I’ve got to finish off the last 14 feet on Sunday…it’s supposed to be 80/Sunny and I will forgo sunscreen for a few shots of 15% Methyl Salicylate and 10% Menthol.
Dear Coppertone…I just came up with a brilliant idea for you.