I made it to Pennsylvania on Sunday – after a quick stop at my friend’s in Virginia.  While at Anne Marie’s, I learned that, allegedly, you cannot train babies to sleep in on the weekends.  What???  On the flip side…they are pretty entertaining at that hour.

Maybe I should start going to bed before dark, getting up before light…maybe I will be more active at go-time.  Nah…not worth the gamble.

And across the borders I went!  Until finally, like an oasis in the desert….

I heart you, Wawa….for my brethren down South – this is what a Wawa looks like….inside it’s chock full of goodness in the form of delicious coffees, stuffed soft pretzels (I prefer cinnamon cream cheese), hoagies made fresh to order, Tastykakes…and of course, you can gas up the car as well.  If you ever make it past Richmond…make sure you stop and try a treat.
Okay – big surprise from Amy & John.  Amy had told me that I should keep the night of the 20th open – for a night out.  I proudly resisted the urge to stalk the “Things To Do” in Philadelphia websites for a few weeks so it would really be a surprise.  I mean, of course, I totally figured out it was going to be a Phillies game and was looking forward to it.
Went over to visit with them Sunday afternoon – and was handed an envelope with my ticket inside.  My ticket to the Phillies game.  That read “Natalie Merchant” and “Merriam Theater”.  Come again??? 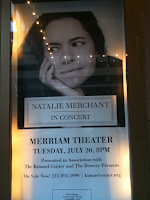 SO EXCITED!!!!  I have no idea how I won the Amy-is-my-friend Lottery, but times like this remind me how lucky I am!  Fantastic surprise!!
For the under, um…we’ll say 25 crowd…Natalie Merchant is a SINGER.  She was the lead in 10,000 Maniacs, which is a BAND.  Her voice is ridiculous…and it never really looks like she’s putting any effort into singing.  And her songs are amazing…I promise, if you’ve ever had even one emotion, she’s written something to describe it perfectly.
The show was last night – the theater was super small, really not a bad seat to be found (oh, John – there are 1,870 seats). 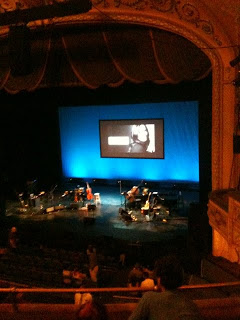 The first half of the show was dedicated to her new album.  Which I don’t have.  And is written from her research and adaptation of poems…many of which I’d never heard.  Well, it was fabulous.  The music was enough on it’s own – but, of course, her songs were just so good.
There was a moment of minor panic when she wrapped up the poetry songs…and said good night.  I mean, it was already a fun night…but were we really not going to hear anything else?  Fear not – back out on stage she came for another two sets of acoustical bliss.
Now, because you know me…you know I’ll need to pick on someone or something right?  Well, I’ve got two, actually.
First…the cell phone addiction.  We had two gals sitting in front of us who were literally texting their way through the show.  They spent more time with there phones open and beaming a glowing light into our faces than Natalie actually spent singing.  They probably could have saved a buttload of money if they’d just sat on their couches, popped in a Natalie Merchant CD and texted each other.  Would have been the same event.
Yes….I did eventually say something…and was pretty nice (I think?) – just asking them to turn off their phones.  It worked…and they eventually left before the show was over.  I really can’t imagine what is SO urgent that you’ve got to text your way through a show.  In the dark.  Where your phone is the brightest thing in the room.  (Refer to “Urgent” Blog).
Second…and I know…this is a Jyl-ism…and yet it drives me crazy…Why is it that people feel the need to scream out songs at a concert?  Do they not think the artist already has a planned list?  Are they not aware that the artist probably has done a show or two before and may have a plan in mind?
For example…go to any James Taylor concert in Raleigh and you will hear people screaming “CAROLINA IN MY MIND!!!” over and over.  I’m just going to throw this out there – if James Taylor is playing IN North Carolina, do you not think he might sing that very song?
It’s like suspecting the Village People are going to skip YMCA at summer camp.  It’s happening, my friends…no need to offer directions.
And after watching Natalie Merchant, I have to say, I’m not sure I’d mess with her – she seems to be way smarter than me….and pretty firm.  She called out every person arriving late – and not in the nice, “Hey, there, welcome to the show…” kind of call-out.  It was more of a “You’ve missed seven songs…there was no opening band” kind of call-out.  Hard core.  Love it.
A huge thanks to Amy & John for an amazing night – sorry I had to sneeze my way through it (yes, summer cold…thanks for making your annual appearance at the most inconvenient time).