Skip to content
Jyl Barlow Uncategorized August 25, 2010 3 Minutes
I wasn’t even going to attempt my usual ‘Wednesday’ writings today…figured that, heck, I’m about to be off the grid for 3 weeks, who’d even notice?
Except as of one hour ago…
I think time stopped.
As you know, the big trip to Northern Europe commences tomorrow.  Actually it commences tonight when my parents hole me up in a hotel minutes from the airport.  It’s not that they don’t trust me.  It’s just that my history of narrowly making flights makes them leery of my airport skills. 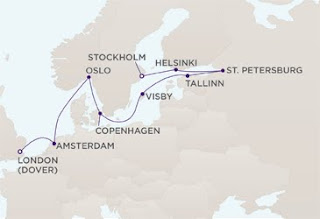 Surprisingly, I haven’t been laying awake at night fretting over packing, flying or how many extra pounds I’ll bring home in my saddlebag.

However, I did wake up this morning and suddenly think, “What the hell is even IN my suitcase??”  As packing (for me) is a process that drags for several weeks…I no longer am in touch with what is at the bottom of the pile.

An unplanned distraction came last week with an unplanned trip to Myrtle Beach.  We’d lost our grandmother a few weeks before and preparations for an October memorial service had to be initiated before we all hopped on a plane to leave the country.  I had full intentions of skipping this process, but was harassed enough by my brother about family time to join in.

If you’ve ever met my family you know already…we can make anything fun.  So we alternated discussions and planning with side adventures.  One of which was hopping on a boat and traveling 15 miles into the ocean…80% recon on ashe spreading…20% fishing.

My nephew brought along his friend, Matt.  Matt will never be invited back to the Carolinas.  Matt is one of those people who is good at everything.  While I was at work one day – the boys all hit the driving range.  It was Matt’s first time with a golf club in his hands.  He was driving the ball nine billion yards, straight as an arrow.

We also used this trip as an opportunity to hold our annual Mini-Golf Championships.  Here’s the format:  Mom is the ref and the rest of us try to beat my brother.  Three holes into the championships and it started misting a bit.  No big deal.

Until minutes later when it turned to a torrential downpour.  I mean buckets of rain.  Cats and Dogs.  Suddenly, we realized, this course was going to change completely.  Because, really…why would we do the logical thing and postpone?

Have you ever tried mini-putting on a green that has so much water on it the balls actually float?

Moment of the weekend?  Matt figured that if he really, really whacked the crap out of his floating ball, it would scamper towards the hole.  Which he did.

Ever had that moment of scary Mom-Silence?  The one where everyone tries to quickly be her favorite by saying, “Dude, you just splashed my mom?/grandma?/wife?”

We let Matt live.  The look of utter panic in his face was punishment enough.

All in all – it was a fun way to get my mind off the packing list for a few days.  As of last night at about 7.30pm…I realized, I was pretty much ready to zip up the suitcase, throw on my travel wear and hit the road.  If only this pesky work day wouldn’t intrude!

You’ll have a nice break from my ramblings – and I’ll be testing out various Ice Bars in the Baltic Area.  Oh yeah – and let’s not forget the Baltic Sea Kayaking tour…and when I say ‘let’s not forget,’ I mean, um, cross your fingers.

Pass this along! It's probably great advice! Or just average.

Love this Blog? Me too. So much so that I thought, "Why not write a book?" For those watching this space, holy heckle… the book is now being edited by people with much better eyesight than me.