Skip to content
jylbear Uncategorized October 29, 2010 3 Minutes
I like when﻿ you pull into Copenhagen (you know, on your boat…) – there’s a big warehouse and one the side, painted in green, it says “cOPENhagen.”  This is definitely a city that is open for business – primarily, the tourist business.
This might have been the first time on the cruise that I felt crowded by other groups – the road along the main square was jam packed with tour buses bringing groups in from cruise ships.  Well, I suppose they could have come from other places too…but this late in the cruise, I started forgetting there were other modes of travel.
Here’s something funny.  For those of you who haven’t been cruising – the docks are usually segregated – so that all the cruise ships dock in one area.  This makes it easier to process the incoming passengers and provides a TARGET for vendors to lay out their goods.
Generally as you disembark the ship, you see the start of chores…one of which always involves the side of the ship, a can of white paint and a roller.  Literally – every stop, the paint comes out and any marks from the previous docking are quickly erased, lest anyone think there was rubbing.

Typically (meaning every time I’ve ever seen it), the painting takes place on the side of the ship that is actually against the dock. Ergo, the painter can stand on the dock and paint. 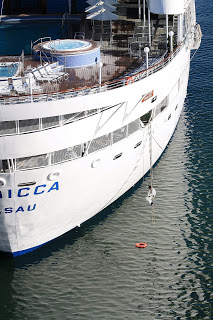 On this day, we were parked end to end with a ship on which someone apparently lost a bet, was drunk or had a really poor idea.  As we were eating breakfast on our back deck, a rope appeared through an access window.

Then a person.  And a life preserver.

Then a paint can and roller were ferried down…

Have you ever tried painting the side of a house while sitting on a swing?  Or maybe mopping a floor while standing on a skateboard?

Fail.  Every time this poor guy tried to use his roller, he pushed himself away from the ship.  There was no rolling, just swinging.  Yes, if it had worked, we’d all have been impressed.  Instead we went for a third cup of coffee to watch the show. 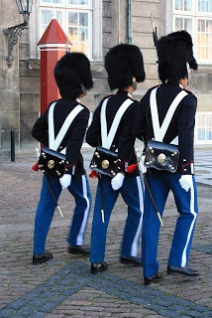 What I like about Copenhagen is the main square – where four palaces sit facing each other.  The Queen lives in one, her son in another, etc..  I like that they all live right there among the people (well, the people probably have smaller homes).

I also like the royal guards – and would like to offer up a spot in front of my house for any that want to move to a nice southern climate (we’ll discuss uniform options ~ wool might not be ideal during the summer months.  Also, I’d like one of those shiny black bags you carry for my own use. No need to bring extra Duke Blue pants).

Another thing I like about Copenhagen is, well, they have an Ice Bar. Because we had already visited the Ice Bar in Stockholm ~ we considered ourselves connoisseurs of chilled vodka.

No need to instruct us on how to wear the poncho (no frozen fingers this time AND we all wore sensible shoes for below freezing drinking). 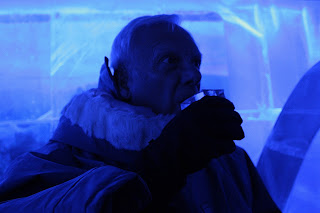 While the rest of our group was oohing and aahing at the Ice Sights…we were belly up to the cold bar making our selections.

Fortunately, my father didn’t force me into a life of crime at this stop as there were no menus available for stealing.  (Once I get my imported guard, the Stockhom IceBar menu will be safe, too.) 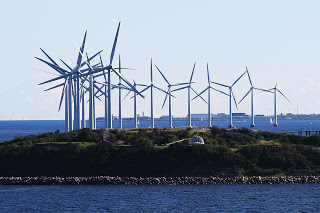 And finally – the environment.  Copenhagen is considered one of the most environmentally friendly cities, with over a third of its citizens commuting by bike to work.  The inner harbor is clean enough to swim in – although I’m guessing there is only about two days a year that it’d be warm enough for my tender toes.

And everywhere you look ~ windmill city.  As far as you can see.  They produce something like 20% of the energy used ~ and I was a bit surprised at the folks in our group that scoffed at that number, mumbling about how that was hardly worth the expense of installing them.  Really?

Our day in Copenhagen was a short one – just enough time to skirt the major stops, drop Dad back off on the ship, do some quick shopping and get back on board for sail away.

Generally we try to be on the top deck to watch the ship pull back into the passing lane ~ perhaps we should have brought our jackets this time…then again…look at those cute little folks.

Wait, did we just invent the Ship Snugglee?? 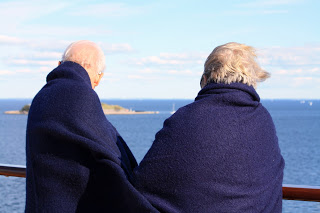