Yesterday I bought myself the first, and I hope last, birthday present for myself.  It was new spark plugs for the Cruiser.  And a tune-up.

Okay, well, that wasn’t exactly my idea of a ‘Hey – you’re birthday’s pretty soon, so why not treat yourself’ gift.  But in order to make myself feel better about the sudden downturn in my bank account, that’s what I’m telling myself.
I don’t know what gene it is that I have that makes me, um, thrifty (oh wait, yes I do, it’s from the Mose side).  Except that I pour money into savings ‘just in case’ – and then when ‘just in case’ arrives I have to twist my own arms to use it.  So now instead of being cheered by the thought of NOT having my check engine light flashing me anytime I hop in the car, I’m feeling glum and annoyed.
I, too, would like a tune-up.  Takers?  No?

The countdown continues.  Granted, most of the world is counting the days to the BIG wedding over in London (note to self:  ask boss if I can work from home that day).  But for the rest of the world – it’s the countdown to my birthday.  We are now t-minus two-ish weeks.  I’m not sure when the Today show will be around doing its opening segment from my living room – but I probably should get to cleaning before too long.

Yesterday, I had my monthly call with my Health Coach today.  My company has offered up free health coaches to anyone who wants to better themselves.  I am huge fan of dedicated time during which I get to talk strictly about me – especially when I don’t have to pay for it, so obviously I signed up.

So since November, when I was first assigned my coach, I’ve had a monthly check-in to make sure I was still exercising (yes), still trying to eat right (yes…not so much trying to drink right though – good thing they never ask) and still making goals for myself (yes, and sometimes I keep them).

There really is a point to this, I swear.

One of the security questions you go through to talk the health coaches is your birth date.  Yesterday, when my health coach realized exactly what birthday was quickly approaching, he said, “Hey, any birthday that you’re still alive for is a good one.”

Well, yes, I suppose that is pretty accurate.  Thanks, Chris – no wonder you get paid the big bucks.

But it did make me think – exactly how long will I keep up this exercise regiment?  Or the watching what I eat routine?  Do I get to stop ever?  Can it be when I’m 40?  Please?

Because I’m sure not turning into a size six at any great speed.

Which I did point out to my health coach.  To which he responded, “Well, why do you do it then?”

Trick question Chris!  I’m not paying you to make me think about why I want to eat right and work out and try to stay in some sort of shape!  You’re only supposed to praise me and tell me how fantastic it is that a lady bordering on Cougartown is so active and pseudo-concerned about her health!

Oh, right, I’m not paying you at all.

After hemming and hawing I finally decided it’s because it makes me feel good to make a go at taking care of myself.  And that because I’ve been doing some form of exercise my whole life, it feels too weird not to at least do something.  Mind you, there are many a days when ‘something’ ends up being vacuuming.  There are also days when ‘something’ ends up thinking about what I could do (file that under ‘it’s the thought that counts’).

Here’s my general schedule (I say general because when I don’t follow this routine, I still think I did):

Three times a week I go to the gym at lunch.  It’s right around the corner from my office.  Going there saves me a whole lot of money because if I didn’t have that, I’d be on a regular rotation of Target-Ulta-Old Navy-Macys-Homegoods.

Three times a week I play tennis.  Mostly doubles, sometimes singles.  I definitely should play more singles.  I used to play a LOT of singles.  But then I realized how much easier it was to have someone on the same side of the net with you to blame for any missed balls.

Now you’d think with all that, I’d be so tiny I’d have to shop in the waif’s department.  No, not really.

So clearly the only reason I hit the gym so regularly is because I work with a bunch of lunatics and need some mental outlet that doesn’t involve picking up my computer and launching it down the emergency exit stairs.

But I didn’t want to tell that to my health coach in case he recommended a meeting with a different kind of coach.

My brother just started getting fit.  Like a month ago.  He stopped eating carbs and started going to the gym.  I have no doubt he’s lost fifty pounds or so.  Jerk.

(Sometimes when I’m writing my blog I realize I’ve gotten lost in the middle.  This just happened. I thought about starting over….but then realized that no matter where I go with this, you’ll still think I’m less crazy that Chuck Sheen)

Maybe there is no real reason for me to work out so much.  I’m not training for the Olympics.  I’m only pretending I’m going to do a 5k someday.  Adidas has yet to offer me a sponsorship for my tennis prowess.  My washboard stomach remains hidden under God knows what. 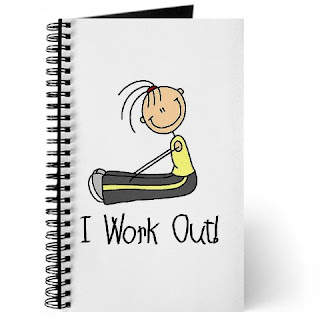 Except that it makes me feel good.
About myself.
About my life.
About going back to work after an hour of pushing the limits (or of watching my stories while walking on the treadmill).
It gives my mind time to decompress.
Or time to think through some things.
It makes me feel productive because I can hear my teeny muscles chirping “We’re still here!  We’re still here!”
Plus you never know when you’re going to get chased.
Can I imagine myself keeping it up for another decade to the big 5-0?  Actually, no.  But I’m not going to worry about that right now.
Right now – I’m going to stay content with what I got.
I may not be the size six I clearly deserve to be, but at least I still got skills.